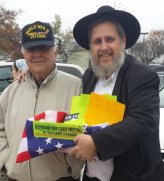 What does colored construction paper, the American and Israeli flags, and Chabad House at Rutgers all have in common? They can all be used to honor Veterans Day. On Tuesday, November 10, at Chabad, during the regular dinner party, volunteers swarmed a table with overflowing with an assortment of markers and colored paper. They were writing messages rife with encouragement, love, and thankfulness to veterans of both the American military and the Israeli Defense Forces. Truly, Chabad acknowledges how great of a service it is to risk sacrificing one’s life for the well-being of their country. The letter writing activity on Tuesday is just a small token of appreciation when juxtaposed to a veteran’s past contributions within the military for the American community.

At the beginning of the event, Rabbi Baruch Goodman lead a moving speech relating Judaism, the American life, and the military. “They stood up for us,” he stated, “Veterans Day reminds us not to take our freedom for granted.” Indeed, in both the United States and in Israel freedom is a privilege, especially the right to religious freedom. Sadly, in all too many modern day countries, the right to practice one’s religion is prohibited. Judaism is no exception, as anti-semitism continues to be an issue of rising concern. “We are grateful that in this country,” Rabbi Goodman continued, “That we can freely practice our Judaism.”

At the booth, groups of students flocked to write their own personal letters. Messages included heartwarming “thank you’s” and other short expressions of appreciation. Additionally, it was common of student to draw images, which in some cases can convey just as much, if not more, than words. The doodles included hearts, soldiers helping others, and Jewish stars. For some students, who have had friends and family serve in the military, this activity was particularly important. Alyssa, a senior at Rutgers University and member of Chabad House, commented, “My grandpa and dad were veterans. I have friends in the military at home and in the IDF.” Writing these letters had a symbolic importance to her, it was an opportunity to give back to those give, or have given, so much.

Today, in the United States, there are a total of 21.8 million veterans. Specifically there are nearly 500,000 veterans alone in New Jersey. Each November 11 is an important reminder of their service, as in the hustle of life it is easy to forget that citizens of this country are fighting for its existence at this very moment. Furthermore, in Israel military service is mandatory with few exceptions and there are currently 176,500 active personnel in the IDF. These brave men and women are key in protecting Israel, the only Jewish state. Despite the risk of injury or even death, they continue to serve wholeheartedly.

Members of Chabad House fully respect, endorse, and support soldiers that protect our basic freedoms. Not only do they enable us to sustain our Jewish practices, but also as stated by Rabbi Goodman, “They give us the freedom to perform mitzvot, which will eventually bring moshiach here.” Crafting small letters of appreciation to these soldiers is a humble way for Chabad House at Rutgers to honor these truths. For more information about how to get involved and about Chabad House at Rutgers, visit us on the web at http://www.chabadrutgers.com, http://www.chabadnj.org, or call 732-296-1800.